RedRat Scheduler provides a mechanism for creating timed events for the output of remote control signals. Each timed event executes a macro, which is a sequence of one or more remote control signals, so the scheduler program includes a mechanism for creating and editing macros. Each timed event can be set to execute only once, a finite number of times or to repeat indefinitely.

User Information for the RedRat Scheduler

Before installing RedRat Scheduler, please ensure that you have the following installed:

To use the Scheduler for output of IR signals, the IR signal dataset needs to be captured from the original remote control handset. You may already have the datasets from your remotes controls, but if not then they can be captured with the help of the Signal Database application: 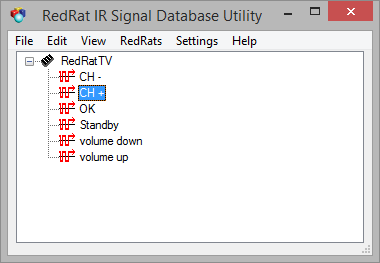 The steps to create the database are as follows:

The captured signals can be tested to validate that they have been recorded correctly and so will control your TV/STB. This is done by selecting a signal and then outputting it using the Edit → Test Signal Output menu item.

The instructions and examples in this section use the USB RedRat3 device, however the irNetBox can be used as well.

Giving your RedRat Device a Name/Location

If you are only ever going to use the Scheduler with one RedRat device, then this step is not so important. The reason for setting the RedRats Name (also called Location) is that when the Scheduler attempts to output IR signals, it has to know which RedRat to use for this operation.

Start the Scheduler and bring up the RedRat device list (RedRats → Find RedRats.) which then shows available RedRats. Double clicking on your RedRat3 device will bring up a dialog box in which the name/location of your RedRat device can be set.

If you have more than one RedRat and will be using one considerably more than the others, then this one can be set as the default (RedRats → Select Default RedRat).

This is done with the Macro Editor in the Scheduler application (Edit → Macro Editor). It has two main panes, the left-hand one showing the list of macros and the right-hand pane showing the actions that have been setup as part of the macro. When a macro is executed, it steps through the actions in the order given in the macro pane. 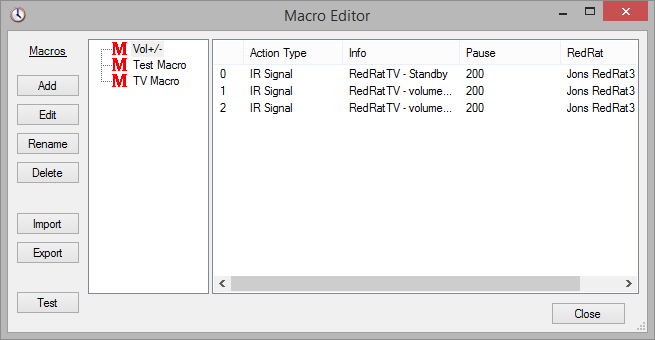 Take the following steps to create a macro:

Each action in the action list has the following properties:

Info: This shows the remote and IR signal to be output.

Pause (units of ms): Following the output of each IR signal, a default pause is given. This is important so that audio/visual equipment is able to recognize the discrete IR signals rather than seeing one long stream of concatenated IR. This value can be adjusted, for example when turning on a TV or set-top box, it can sometimes take a couple of seconds before it responds to further IR commands.

RedRat: The displays which RedRat is to be used for output of the signals.

Actions can be re-ordered by dragging them to the required position.

Double clicking on an action will bring up an action editor dialog.

Both single actions and complete macros can be tested by right-clicking on the action or macro respectively.

A timed event is basically the execution of a macro at a particular time. All timed events are listed in the main scheduler window as shown below.

The Schedule menu is used for adding, deleting, editing, enabling and disabling timed events. Even when an event has been run with no further remaining repeats, the event remains listed in the window until explicitly deleted.

Once an event has been created, the edit dialog is used to configure it (double-click on the event or use the Schedule →Edit Timed Event menu item). 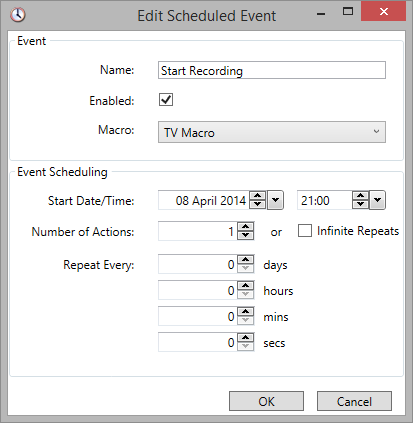 Name: A descriptive label for display in the main window.

Enabled: Sets whether this timed event is to run or not.

Macro: The macro to be run by this event.

Start Date/Time: The time/date at which the macro will be run for the first time.

Number of Actions: By default, the macro will only be run once, however the event can be set to repeat a number of times, or to repeat indefinitely.

Repeat Every: If the macro execution is to be repeated, then the repeat interval is set here.

There are several types of action that can be used as part of a macro. All action types can be edited by double clicking them in action list display.

These are the most common form of macro action, and each action is the output of a single IR signal. They are added to the action list by dragging them from the Signal DB utility and dropping then onto the action list.

This action displays a message box with a user configurable message to notify the user that a certain point in the macro execution has been reached. Macro execution can continue while the box is displayed, or it can be halted until the user has clicked “OK” in the box. The message box can also be configured to emit and audible beep when it is displayed.

A beep is intended to provide audible feedback when a certain point in a macro has been reached. Various parameters can be changed:

Scheduler options are found under the File menu item.

If Scheduler is kept running for long periods, you may not want to see it in the system tray. By checking this box, it will be hidden when minimized.

To bring up the application again, the icon in the notification area can be used.

When Scheduler outputs IR signals via an irNetBox, its default behavior is to open and close the connection each time. In some situations, this could lead to problems, for example if another application starts using the irNetBox while Scheduler is waiting for the next event. It is possible to instruct Scheduler to keep connections to irNetBoxes open permanently by checking this check box.