A core program for use with both the RedRat3 and irNetBox, the IR Signal Database Utility Supports the creation, viewing and testing of IR signal datasets.

What is a signal database, and why may you want one? It is your local set of IR remote control signals that you use and work with, made up of one or more remotes (e.g. TV, DVD_PLAYER) each with a set of IR signals. These are usually captured directly from the original remote control unit via a RedRat device, analysed and then stored in an XML file.

An IR signal dataset is basically a copy of the IR signals produced by your remote control unit. These can then be transmitted to control your TV or STB, or are used for comparison when decoding input IR signals.

The process of creating a dataset from your remote control unit is often referred to as learning or capture. We recommend using either a USB RedRat3-II or a RedRat-X for IR capture, though an irNetBox can be used as well. 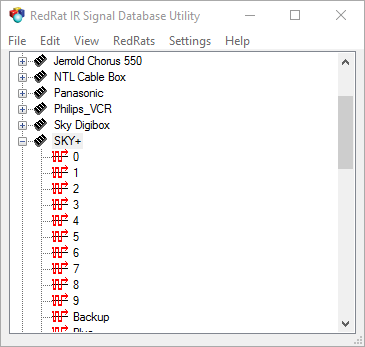 This process can be quite laborious, so the wizard can be used instead. This is started from the Edit > New Device/Remote Wizard menu item, and allows you to edit the list of IR signals to capture, then starts a loop for capture of them all.

Obtaining an accurate IR signal dataset is very important as the reliability of operations using this data depend on it. Therefore investing a little time in ensuring that all IR signals are correctly captured can save a lot of time later.

IMPROVING THE QUALITY OF THE CAPTURED DATA

Sunlight and artificial light both contain a certain amount of IR, so it is recommended that capture should by done with as little incident light on the RedRat device as possible, i.e. ensure the device is shaded. The RedRat3-II device has more light screening, so is a little bit more robust in this respect. When learning, hold the remote control about 10 to 20cm away from the RedRat device and give a short but firm press of the remote control button. Most IR signals are basically sequences of pulses of a carrier wave, for example at 38KHz. However there is a large variation in the way in which different protocols are coded by sequences of pulses, so it may be necessary to adjust the way in which IR signals are captured:

IR signal waveforms can be viewed by double-clicking on an IR signal and selecting the IR Data button, bringing up the waveform viewer and editor. A certain amount of data editing is also possible, for example adjusting the number of repeats. 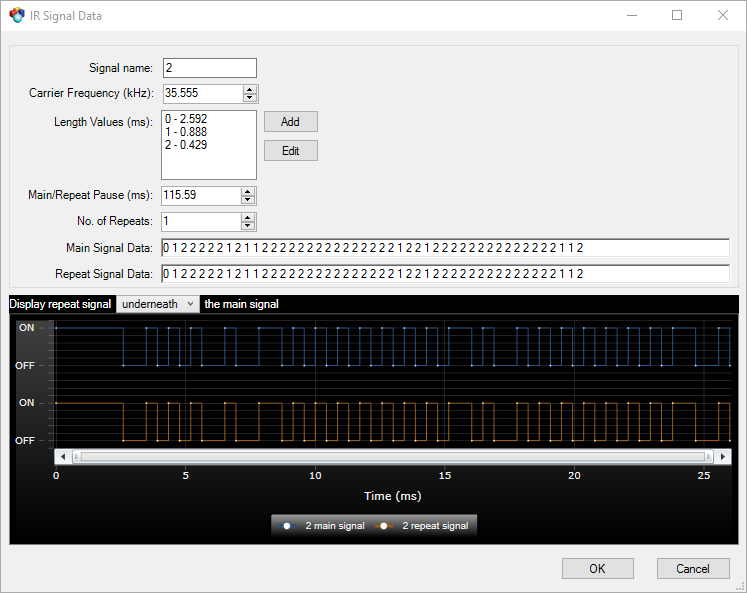 The aim of signal decoding is for use in applications which controls PC operation from several meters away using a remote control handset. Examples could be PVR applications, Powerpoint displays etc. The primary RedRat application for use here is RedRatControl.

As with IR signal output, reliable signal decoding depends on good quality IR data, but also on some understanding of the IR protocol used. RedRat software uses a general purpose decoder which works well for a good proportion of IR signals, but not all.

So to test how well it works with your dataset, open the decode window from the View menu item, point your remote control at the RedRat and press some of the buttons. If it can’t decode them or they haven’t been captured, then an “unknown” will be shown.

We do have additional decoders for certain types of IR protocol not handled well by the default decoder, so please contact RedRat support for more information about this.

IR signal datasets can be exported in other formats for different applications: